‘Lost in time’ –  Mixed media glass design based on the hidden beauty of locations lost in time. 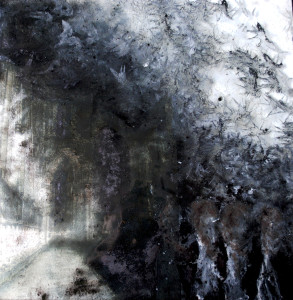 Fountains Abbey was founded in 1132 by thirteen Benedictine mon

ks from St Mary’s Abbey in York seeking a simpler life, who later became Cistercian monks. Under the Cistercian rules they worked hard, lived mainly in silence, followed a diet barely above subsistence level, and wore the regulation habit of coarse undyed wool. The hard work of the monks lead to the Abbey becoming one of the richest religious sites in England. The 14th century saw economic collapse due to the combined effects of bad harvests, Scots raids, the Black Death and financial mismanagement. Following the Dissolution of the Monasteries in 1539 by Henry VIII, the Abbey buildings and over 500 acres of land were sold to Sir Richard Gresham, a merchant. For a few months after the Dissolution, the abbey buildings stood empty and by 1540 most of the glass and lead had been stripped and sold off. Fountains Hall was built but the Abbey fell into a state of disrepair. Now only the ruins remain to remind us of its long lost history.

This piece depicts the darkest days of the Abbey and its fall into ruin leaving only the memory of the monks who one inhabited it.

The development of Ancoats began in the late 1700s, and peaked during the Industrial Revolution, when Manchester became known as ‘Cottonopolis’. Mills sprung up all over and homes were built for the hundreds of workers. Eventually cotton spinning ended in Manchester and other uses were found for the mills: clothes manufacture, machinery repairs and warehouses for imported goods’ rag trade. By the 1960’s most trades had moved abroad and the area fell into further decline. Many workers moved away from the area and many mills lay empty. The area eventually became derelict leaving only a few remaining residents living among the empty ruins. In 1989, part of Ancoats was designated a Conservation Area and 13 buildings listed due to the areas historical significance as and industrial suburb. Thanks to this the area became a site listed for regeneration.

This piece shows the rise of the new Ancoats from the darkness of its former decline.